Tokenomics is formed from a merge of two phrases, ‘token’ and ‘economics’ to try and explain the supply and demand of the cryptocurrency markets. It is a big part of the famous DYOR (Do Your Own Research) on coins and projects you are about to invest in.

What is a token

A token is a digital unit of a cryptocurrency used for a particular utility which runs on a blockchain. Cryptocurrencies are built on a foundation to solve a problem or improve efficiency of a certain pre-existing feature. This is where Tokenomics are important for investor in deciding which horse to back. Putting this into perceptective, recently the Luna Ecosystem crumbled to near zero from. In losses to the tune of -99% on their native token Luna and stablecoin UST. This is primarily because of unsustainable foundations and unable to hold together the market demands.

It can be defined as the total value of coin in circulation of a certain coin. This is arrivved at by multiplying the market price of a single coin with the number of coins in circulation, mined or othe wise. The general concept in that the larger the market cap, the safer the investment in the coin ecosystem. The total supply of Bitcoin coins for example is 21 million. Types of market you might come across are:

How market cap can help an investors

Investors can use market cap information to employ strategies for example the Weighted Market Cap strategy. As laid out by Jeremy Schneider, the personal finance expert behind Personal Finance, it can be applied in Bitcoin and Ethereum. Weighted market cap strategy entails putting a proportional investment to each asset based on market cap. This would mean splitting the investment according to the respective market caps. 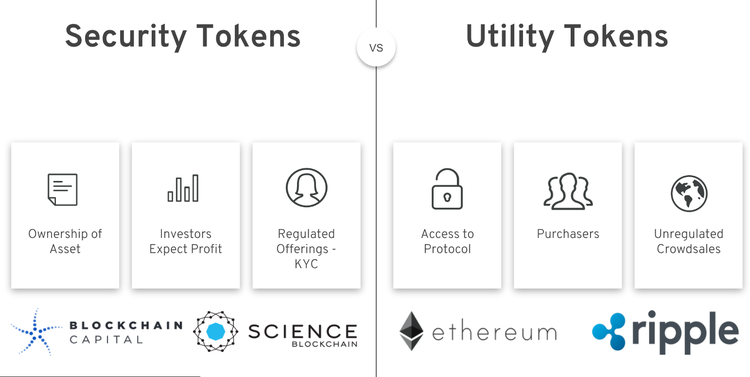 The sole purpose of coins, or currencies, is to convey monetary value. Currency examples include Bitcoin (BTC) and Litecoin (LTC).

Tokens, on the other hand, are a whole other type of crypto. The most frequent forms are security, equity and utility tokens.

The primary distinction between a utility token and a security token is that security tokens grant a corporation ownership rights. Consider them to be digital, decentralized stock certificates. Financial authorities such as the Securities and Exchange Commission (SEC) classify security tokens as securities. They are subjected to the same restrictions as stocks, bonds, ETFs, and other securities.

They are commonly linked to a securities offering, "security tokens". The securities in question are often shares in the firm issuing the token as a form of long-term investment in the technological company's growth. They're regulated in the same way that securities in more traditional markets are.

The right to have some influence in what happens with the organization that issued the security token is a key characteristic of most security tokens. When you purchase a security token, you are effectively becoming a major shareholder, and the amount you invest is directly influenced by the company's valuation.

A utility token may be used for almost anything a developer desires. Utility tokens, in general, give users access to a certain service or product through the blockchain ecosystem. To put it another way, you could require a specific utility token to interact with an altcoin's network.

While cryptocurrencies are digital money, utility tokens are more accurately defined as software. They can be used to transfer value, although that isn't their primary function.

Users may require a specific DEX token to trade tokens on a decentralized exchange (DEX) or engage in any variety of decentralized finance (DeFi) activities. Alternatively, a token like this may be used to reward platform users or pay interest to individuals who deposit cash that the platform subsequently lends to borrowers.

Non-fungible tokens (NFTs) are a form of one-of-a-kind utility token. NFT tokens are one-of-a-kind digital works of art, yet they may also be used to pay for music.

Utility tokens issued as part of Initial Coin Offerings (ICOs) might be utilized for harmful or fraudulent purposes. For example, during the 2017-18 ICO mania, some new blockchain businesses promised investors high returns on utility tokens. In truth, the projects were fictitious, and no new software applications were being developed. Investors who bought these ICO tokens had no redress and frequently lost everything. The Ethereum network powers the majority of these tokens.

That's all for the first part of Tokenomics. Stay tuned for Part II of Tokenomics to cover more about use cases and Token Mechanics, how it all works. Happy trading Fam!